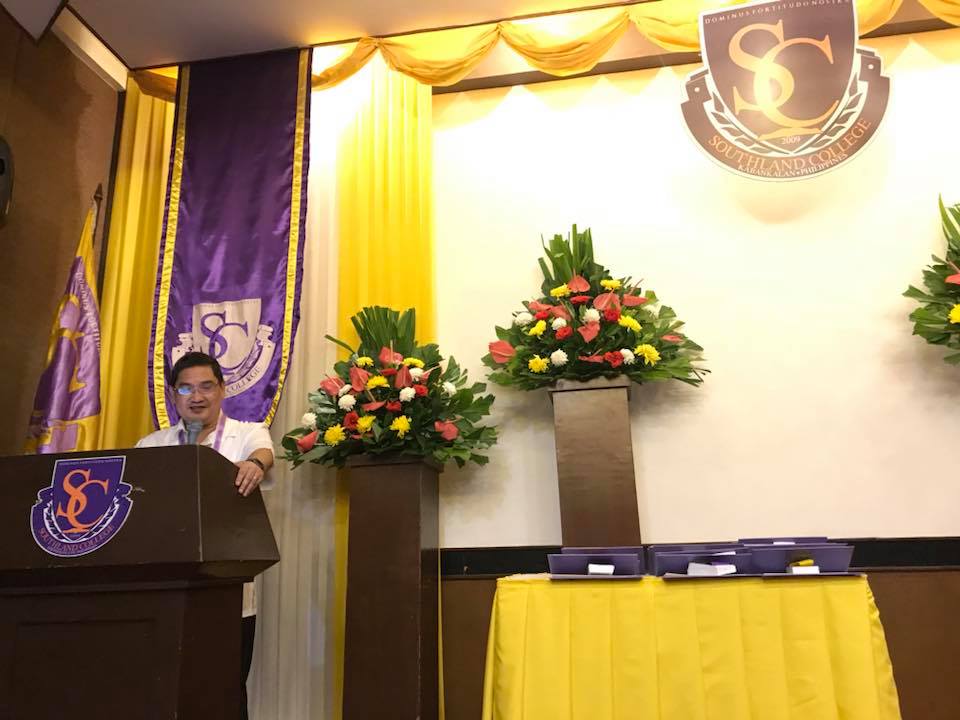 Thank you for the honor and privilege you’ve given me to be your guest speaker this afternoon. I wasn’t given a particular theme to speak on, but I have a rule for speaking engagements such as this one, and that is to keep my speech short. That usually makes the audience happy from the start. Before I proceed let me congratulate you for a job well done. I don’t have to tell you how important getting an education is for your future, and the fact that you’re gathered here today as honor students means that you take education seriously and you care for your future. And congratulations too to Southland College, its leadership, staff and teachers, for your wonderful contribution to the molding of these young lives.

I am glad that you are honor students. To me, that means my words won’t fall on deaf ears because your being honor students shows that you care about preparing yourselves well to face a future the shape of which is still unknown to you. And I hope, in the brief time I have, I can say something that might be of some help to you. After all I’ve traveled further along the path of life than most if not all of you have. My credentials are my long stay in the school of life, or the school of hard knocks, as some call it. And my grey hairs are the proof that I might have something worth saying.

But what that is you still don’t know. You are probably expecting that I will say something inspirational, something about how to succeed in life. Let me stop you right there. For when I was your age – and that was a long, long time ago – I happened to read a book by a Trappist monk named Thomas Merton, and at a relatively young age I learned from Thomas Merton that success is over-rated, and that there’s more to life than merely making a lot of money and making a name for yourself. I knew then that I won’t be pursuing success as conventionally defined. I adopted the following as my motto: “All of my life I have avoided success. And I have succeeded in avoiding it.”

Thomas Merton wasn’t the last book I read regarding success as being over-rated. In the course of my reading – I am very fond of reading – I chanced upon a compilation of essays which included an essay by Henry David Thoreau, entitled The Conclusion to Walden. In that book I read and memorized the following quote: “Why are we in such desperate haste to succeed and in such desperate enterprises? If a man does not keep pace with his companions, perhaps it is because he hears a different drummer. Let him step to the music which he hears, however measured or far away.”

Your teachers are probably getting nervous by now. They are probably asking themselves, “Where is he going with this? We better not invite him again!” The truth is I do not delight in making provocative statements. But I do think some things need to be said, especially when no one else is saying them. I’m not saying success is bad; I’m saying that it’s over-rated. Besides, I wonder what we mean by it. Success according to whose definition? Yes, success, but at what cost?”

That’s why Thoreau’s question is worth pondering: “Why are we in such desperate haste to succeed and in such desperate enterprises?” Don’t get me wrong. I’m not against success. In fact, I don’t really like being against anything. I prefer to be for something, rather than against something. And what I’m for is understanding. Or in other words, I’m for wisdom. If we intend to pursue success, I want us to understand what it really means and what it involves. Is this for me? Is it worth it?

I had a classmate who failed the bar exams. He never became a lawyer. Now 25 years after, he’s a successful businessman. You can say that failure was the best thing that ever happened to him because it taught him to leave a path that wasn’t for him, in order to pursue his true calling, the thing he was really good at.

To be sure, I might not be a believer in what this world calls success, but I do believe in honest and prodigious effort. I want you to do your best in whatever it is God has called you to do with the life he has given you. But whether your efforts succeed or not, that is up to him. Whatever thy hand findeth to do, do it with thy might. But at the end of the day, results are in the hands of God.

In conclusion, let me confess to you that I’m actually trying to find my way through my own speech towards a decent conclusion. I began with success being over-rated, but then it turns out I’m not against the exertion of effort that often leads to success. So what am I really saying? Which is which? If it’s not success I’m advocating what exactly is it? Something I learned in church a long time ago. In lieu of success I espouse faithfulness. As long as one has done his best, as long as he has faithfully discharged the tasks that providence has assigned to him, it no longer matters whether the world considers him a success or not. He has a greater master to please, and the greatest success that matters to him is to hear his Master say at the end of the day, “Well done, thou good and faithful servant. Enter thou into the joy of thy Lord.”

Thank you and congratulations once again to all of you.

The matters contained in this blog are for your general information only. This blog is not intended to be a forum for obtaining legal advice on specific legal issues. If you need legal advice, kindly contact a lawyer who can provide the assistance that you may require.